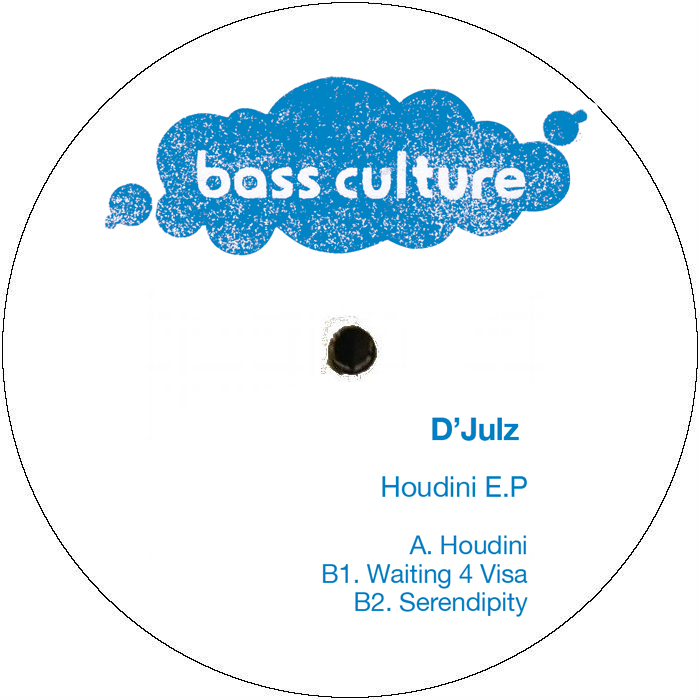 Bass Culture’s latest release comes straight from the studio of the label head, D’Julz. A man who draws on dub influences, groove and deep soul-enriching rhythms, D’Julz is a member of the Paris old school fraternity and brings that classic sound right into the 21st Century with his Houdini EP. Across three tracks we have a selection of music that epitomises what he’s all about. The title track gets things rolling with a sultry groove pervading throughout, crunchy claps add depth while fizzing synth lines and throwback yelps give it plenty of character. Second track ‘Waiting 4 Visa’ is a classy breakbeat-led outing, delicate effects loom in the background entrancing the listener while the minimal composition keeps things simple and hypnotic. Lastly ‘Serendipity’ takes us a few layers deeper, with a laid-back bounce and chirpy bleeps really bringing it to life. D’Julz shows us once again why he’s one of the mainstays of the Paris, a godfather who does everything with a touch of class.

‘These are hott! Waiting 4 Visa is my favorite but really like all of them!’ Ryan Elliott ‘i love the release! all three tracks are great!’ Sebo K ‘I played them , good!’ Cassy ‘Mortel!’ Laurent Garnier ‘Amazing tunes. In heavy rotation of my sets. Houdini I play 4 times this weekend and Serendipity 2 times at the beginning of my set’ Tobi Neumann ‘these tracks will  destroy the dance floor’ Dyed Soundorom ‘houdini is the cut for me, big thx’ Ben Sims ‘nice ep ! all tracks work fine for me. Serendipity I like most’ Dorian Paic ‘Great release from the boss man!’ Josh Wink ‘Great as always!’ Delano Smith ‘alwayz on point’ Sneak ‘Houdini is super cool ! Love it !’ Anja Schneider ‘Houdini has been doing it on the dancefloor!!!!’ Doc Martin abracadabra … serendipity ! Praslea 3 great tracks.hard to pick one – really love the vibe of all of them Tiefschwarz love the atmosphere of these tracks, all about the mood and groove here, I think Waiting for Visa is something special though…let this EP be a lesson to those releasing one track every week, you release an EP when you have something to say, not just to take up space. Well Done! Dan Curtin This is the absolute shit .. this man is a hero Danny Howells Houdini for me Marco Resmann Waiting for visa 🙂 Nastia First Class Ep !!! John Jastszebski Really nice package, particularly Waiting 4 Visa. Looking forward to trying this out Laura Jones Good stuff as usual Cesar Merveille bumpin stuff from D’Julz! Houdini for me Jacques Renault that’s great ep! great trx to play Varoslav Gros gros Ep. September chart direct! Okain Killer Stuff!!!, thanks <3 Franco Cinelli Houdini is def the one i will play ….Another killer from Djulz ! Master-H all tracks sound good Danny Tenaglia serendipty is the one for me Roland Appel “Houdini” is great, but it´s “Waiting 4 Visa” that get´s me the most today! Kiki nice vibes alround like the sneak/wild pitch vibes on houdini Matthew Styles Great release by the man himself. Like all three tracks !! Perfect range for a 12″ Einzelkind yeah! good one 🙂 Julietta DJULZ IS THE MAN I LOVE THIS EP Halo Houdini is groovy! Simon Baker cool EP. will def play!!!! Ray Okpara excellent stuff! really feeling the whole release, classy and fresh just what i would expect from julz! full support on a killer e.p. Adam Shelton Great Ep love it!!!!! Houdini and Serendipity!!!!!!!!! Tania Vulcano