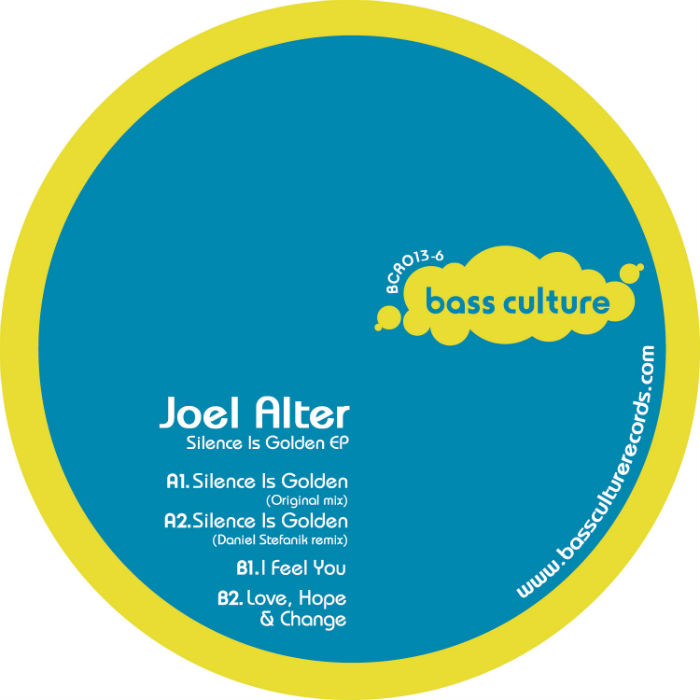 Another debut for the new Bass Culture release. For BCR013, we welcome Sweden’s Joel Alter. As a trained Violinist and composer for the Swedish National Theatre, Joel’s first steps into the world of electronic composition came with an exotic mixture of classical influence and modern inspiration, from acts such as Depeche Mode, Jean-Michel Jarre and Front 242. A key figure on the Swedish music scene since 1995, Joel has always seen his music as stemming from the meeting of a variety of artforms. His first steps onto the international circuit came with the signing of material to Int. DeeJay Gigolo and Minus. Since then, he has developed a strong relationship with Hamburg label, Room With A View, featuring on seven releases since early 2009, as well as releasing on Berlin based label Sweatshop. It was January’s ‘Preaching To The Choir’ on Room With A View,  a track that became a firm favourite with D’Julz, and included on his Rex Club compilation, that lead to a request for an EP for Bass Culture. The ‘Silence Is Golden’ EP is a broad, four track selection, showcasing the sounds and style of the Swede. The deep, popping-bass and crescendo hitting keys of the title track, are supported by the excellent ‘I Feel You’. A track that, uses the most recognizable of vocal samples, in a highly respectful and fresh way. ‘Love, Hope and Change’ is a haunting slice of melancholy, that shines through its elegant, cascading piano. One grand debut deserves another, and Bass Culture welcomes Daniel Stefanik with his take on ‘Silence Is Golden’. The man from Leipzig reworks the original into a late-night tribal-tech number, using its silky keys to perfection and retaining its air of elegance.

Seth Troxler – “Bass Culture doesn’t stop another great EP!” – Luciano – “Great label and great record! Love the track of Daniel Stefanik.” – Franck Roger – “Le Silence est D’or pour moi.” – Agnes – “Yes like this, Daniel Stefanik is pure class and pure style!” – Reboot – “Daniel Stefanik Remix is a mega bomb!” – Jackmate – “Silence Is Golden is my fave, will play that out!” – Paul Woolford – “Solid as usual for Bass Culture, with the Nina Simone tool going in the box as a handy tool. I think ‘Early Birds’ is actually my favourite track but it’s all quality.” – Funk D’Void – “I Feel You is deeeeep and delish.” – Deetron – “All tracks are very nice but Love hope and change wins for me. Will play the Stefanik Remix also.” – Raresh – “Good ep. I’m gonna try it out.” – Nick Curly – “Wicked release again… full support.” – Anja Schneider – “Again a very nice Bass Culture. Like a lot Stefanik mix and I Feel You. Yes feeling it!” – Mathias Kaden – “Great!!!! Silence Is Golden Original and Daniel´s remix is for me J” – Kiki – “It’s the Daniel Stefanik Remix for me here! Full support!” – Robert Dietz – “Big fan of the Stefanik remix. Daniel is my man…” – Radio Slave – “Stefanik mix is gonna rock dem floors! Full support and lots of plays ahead.” – Terry Francis – (Fabric London) – “Like all of these!!” – Tania Vulcano – “Love that sound.. very complete ep, will play it!” – Jimpster – “Yeah! Seriously good EP this. The original of Silence is a real winner but all tracks are top quality. Will be playing it a lot.” – Alex Neri – “Another great release from a great label… full support!” – Ali – (Tiefschwarz) – “I love it! Great package.” – Josh Wink – “Like the ol’ school deepness of Silence is Golden and the I Feel You track. Good release for Joel and Bass Culture…” – Ralf – “Daniel Stefanik Remix..No doubt!!” – Gorge – “Silence in both mixes for me, thanks.” – Laurent Garnier – “Lovely deep house ep – will play Silence Is Golden.” – Satoshi Tomiie – “Silence Is Golden is the one for me here, thanks!” – Sebo K – “Great original versions and another superb remix by Daniel!” – Ryan Crosson – “Functional tunes all around J” – Axel Boman – “Great EP! Silence Is Golden is amazing, great work as usual by Joel!” – Marco Resmann – “Pretty nice release. “I Feel You” and Daniel’s mix of “Silence Is Golden” are the sureshots for me. The rest is just brilliant to open or close a night. Full support.” – Michel Cleis – “Great ep, as usual from Bass Culture!” – Danny Howells – “Excellent range of styles here, will definitely be getting stuck into this.” – Tobi Neumann – “I will play & buy this ep, i like Silence Is Golden original and also the Daniel Stefanik remx as well as the I Feel You. Is the voice Nina Simone? Great release!” – Marc Romboy – “Stefanik in a good shape!!!!!” – Martin Eyerer – “Amazing stripped down mix!” – Shlomi Aber – “Been playing the original Silence for long time now, great track , but just run into the other tracks and I Feel You is dope … full support, always into Joel’s music.” – Frank – (Ame) – “Love Hope And Change… sounds good to me J” – Ray Okpara – “Nice one. Again Nina Simone vocals which we know… but like the mix and will play for sure J” – Diesel – (X-Press 2) – “Daniel is the man. Superb” –  Rocky – (X-Press 2) – “Super stuff. Really liking the last 2 tracks.” –  Greg – (Catz n Dogz) – “Silence Is Golden is DOPE!” –  Michel de Hey – “Love Mr Alter, and this release tops his productions so far!” –  Martinez Brothers – “Feeling I Feel You!” –  Layo – “Another very good release on Bass Culture.” –  Arnaud Le Texier – “Silence Is Golden Daniel Stefanik Remix is great! I like Love Hope and Change.” –  Butch – “Daniel Stefanik Remix is lovely.” – Lele Sacchi – (Boogie Drama/Floor Radio Italy) – “Great piano riffs as we are used to expect from Bass Culture. Really nice original, plus a really competitive dancefloor tool by Stefanik. Also it’s always good to hear a good use of ‘Feelin Good’ and I feel you dos that.” -Across The Line – (BBC Ulster) – “Wicked ep, such a lovely sound on all tracks.” – Ceoltronic Radio – (RTE Pulse, Dublin) – “Love Hope and Change is very nice. Enjoying that. Nice one.” – Karlos Sense – (Ibiza Sonica) – “AMAZING PACKAGE….simply FANTASTIC!!! Full support all pack. Congratulations…” – Victor FL – (DJ Magazine Spain) – “Everything exudes quality here but I Feel You is just awesome. Perfect combination of deep bassy rhythms with Nina Simone… HUGE.” – Thilo – (Groove Magazine Germany) – “Review in our March issue.” – Scan Mode – (ClubbingSpain/DJMag Spain) – “I Feel You is the one for me!” – Only For Dj’s Magazine – “Daniel Stefanik rules !!!!!!!! J Reviewed and supported.” – Roual Galloway – (Faith Fanzine/Radio) – “Where’s the Silence – great growing track an overall good package.” –  Diversions – (CHRY 105.5FM Toronto, Canada) – “Super release overall, Love Hope And Change is fantastic – nice going!” –  Jose Maria Ramon – (Ibiza Global Radio) – “Spectacular I Feel You really love this E.P. Full support from Ibiza Global Radio.” –  Jimmy P – (Faith Fanzine/Radio) – “Stefanik turns it out!” –  Ben – (DJ Magazine) – “Cool release, Bass Culture is smashing it!” –  Adam – (DJ Magazine UK) – “Silence Is Golden is lush. Deep, soulful and jazzy, perfect for the after hours.” –  Russ – (i-DJ Magazine) – “Great stuff as ever from Bass Culture!”