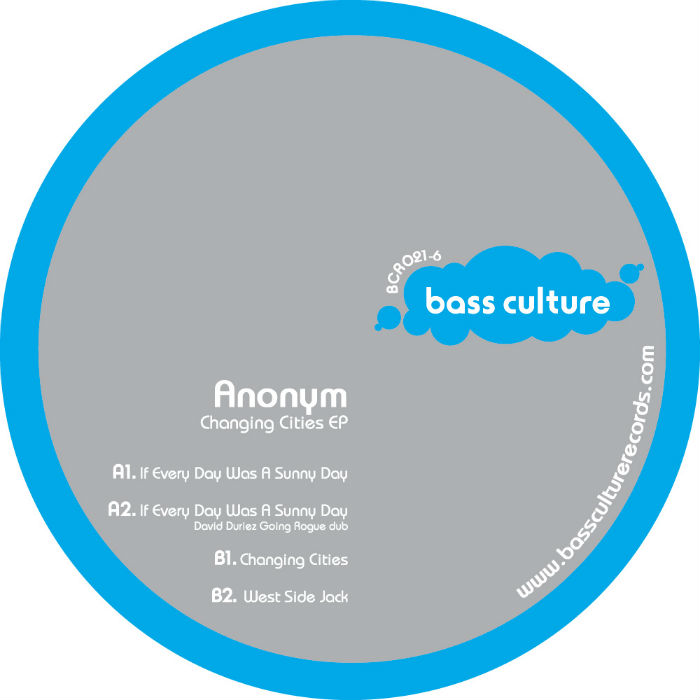 Release number 021 for Bass Culture Records and they once again look to their Detroit connection and the always on point, Anonym. Having first made an appearance on the label back in 2009, remixing Zoe Xenia‘s “Let The Music Play,” it was his own 2010 ep “Lov Is Easy” that really established the mysterious producer as a founding BC family member. The ep continues to be one of the labels most popular releases.  As we enter 2012 Anonym makes his much anticipated return with another choice three track selection backed by a brace of mixes from David Duriez. Opening the EP is “Everyday Was A Sunny Day” and ‘Preacher’ house never sounded so powerful. “West Side Jack” sees Anonym moving out of the sun and into the eery shade. Hypnotic to the end, its unexpected twist in the final third will surprise many. Third and final original is the title track, “Changing Cities” which continues you with the suspense whilst plunging us to its warm depths. Warmth is also the key ingredient in the remixes of “Every Day Is A Sunny Day” from French house legend, David Duriez. Making his return to production for the first time in four years, David steps away from the all encompassing intensity of the original, bringing a looseness and flow, allowing his beats to breathe and the bassline to develop and take hold. This is house music at its finest and together with its Dub, a fitting addition to another exciting Bass Culture release. Welcome back David!

Nick Curly – “Amazing release…..one of the best labels for me at the moment!” – Ryan Crosson – “Cool package. Although wish there weren’t vox on original of “Everyday”. Will be playing Changing Cities for sure.” – Deetron – “West Side Jack is the leader for me here! In the sets!” – Axel Boman – “I am of course in love with Anonym since a few years now. I want to have his babies!! I LOVE Changing Cities and West Side Jack on this one!!!!” – Danny Howells – “All great tracks here, though possibly one of Duriez’s as a favourite for me. Thank you for sending!!” – Varoslav – “Great pack of tracks and mixes again from Bass Culture! I will be playing!!” – Alex Celler – “5/5 for Changing Cities – in da box!!!” – Craig Morrison – (Silicone Soul) – “Cool release, always a sucker for a bit of preacher man action… great groove too and it’s especially great to hear David back behind the desk again. Thx for sending!” – Willie Graff – (Pacha/Cielo) – “Big fan of Anonym’s music.Don’t know which song to pick as my fave but i’ll be playing them all for sure. David Duriez mixes also sound great! Nice release.” – Martinez – “Sounds FAT!! Love the Anonym originals here.. Full Support from me!” – Rocco (Rodamaal) – “If Everyday Was A Sunny Day is SUPER DOPE ! Support on the Original mix!” – Ralph Lawson – “It’s really great to hear David Duriez again!!” – Terry Francis – (Fabric London) – “I’m liking a few of these guys, good ep for me!!! West Side Jack maybe the fav?” – Fred Everything – “Good to see Mr Duriez back in biz! My fav on this package is the original of If Everyday… Will work well in the techier moments of my sets” – Laurent Garnier – “Encore du bien funkyyyyy HUMMMMMMM Terrrrrible.” – Dario Zenker – “Changing Cities has such a lovely vibe! Support.” – Okain – “What a nice record! Changing Cities & West Side Jack and of course the David Duriez remixes. Good to see him back!” – Ryan Elliott – “West Side Jack is the real stand out to me here. Support!” – Spencer Parker – “West Side Jack is great! Great to see Duriez back too!!!!!” – Anja Schneider – “Great, as always from Bass Culture and it’s awesome to have a David Duriez mix! Chapeau!” – AME (Kristian) – “If Everyday Was A Sunny Day is a GREAT one!!! Thanks.” – Kiki – “Yet another fanatstic ep by Anonym! I am a fan! If i have to dig out the truffles it’s a tough one between both b-side tracks…” – ZDAR – (Cassius) – “Thanks bros!! Lovin this jackin bumping sweatin’ house. I really love it. Great. Will play If Everyday Was A Sunny Day tonight!!!!” – Larsson – “Another BOMB Anonym Release!!! Thank you for sending guys, West Side Jack is my fav!!!” – Justin Martin – “I LOVE the David Duriez Dub here guys. Bomb!!” – Luke Solomon – “Oh yes!!!! 100% Support from me on Changing Cities!!“ – Master-H – “Changing Cities is simply…. DOPE!” – Anthony Collins – “Killer release again… Anonym is on fire!! If Everyday Was A Sunny Day is my fave.” – Luca Bacchetti – “I love all the tracks here!!!!! Anomym is rocking! I’m addicted to Bass Culture.” – Franck Roger – “David Duriez Dub is coming out on top for me on this release. Well done. Thanksss.” – Reboot – “Bomb! The whole release is one big BOMB!!” – Kenny Larkin – “The meeting of Techno and Eddie Murphy!! Will be supporting for sure!” – Nikola Baytala – “Changing Cites & West Side Jack are super dope Traxx!! Will play tonite at [KONTROL]. Thank you.” – Satoshi Otsuki – “If Everyday Was A Sunny Day is coming with the wicked groove! Support!!!” – Fritz Zander – “This is such a great release! Changing Cities is awesome, thanks!” – Diesel – (X-Press 2) – “Another great package!!!!!!!!!!!!!!!!!!!!!!!!!!!! Feeling Changing Cities so much.” – Jimpster – “Super solid EP from Bassculture once again. Really like the deep n rolling vibes on the Duriez Dub. Nice one.” – Layo – „First promo of 2012 and this is very cool!! If Everyday Was A Sunny Day… it would be Dubai… better some rain J“ – Raresh – „Changing Cities is sounding SUPER nice!!!“ – Lele Sacchi (Boogie Drama / Floor Radio) – “Oh Yes, the David Duriez comeback! Have been waiting for this, come on David more tunes like this. Love it! Also the original is good anyway.” – Chris Ç – (Dinamo.fm / Acik Radio Istanbul) – “Dope EP! Will play tomorrow!” – Raphael – (Partysan / Stuttgart) – “Will try If Everyday Was A Sunny Day.” – Matt – (Datatransmission.co.uk) – “Reviewing this week for DT.” – Emeline – (The Rex / Trax) – “Thank you, really like all tracks!” – Thilo – (Groove Magazine Germany) – “Review in March issue.” – Roual Galloway – (Faith Fanzine / Radio) – “Nice collection from Anonym with West Side Jack the pick for me.” – Sébastien B – (Paris One Radio) – “Duriez mixes are good!!” – Makossa – (Radio fm4 / Vienna) – ” If Everyday Was A Sunny Day sounds like a hit.” – Diversions – (CHRY 105.5 Toronto) – „Terrific release –  really feeling the edgy and tight original mix of If Everyday Was A Sunny Day… especially the Eddie Murphy vocal samples!“ – Scan Mode – (DJ Magazine Spain) – “David Duriez Remix is amazing!!!” – Edu – (Deejay.es) – „The original and Duriez remixes are my favourites here. Great work!“ – Only For DJ’s Magazine France – “Happy House around here! Big up to David Duriez!!” – Agus – (Deejay.es) – “Wow! Great package! Love original and Duriez mixes of “If Everyday Was A Sunny Day” and “West Side Jack” (amazing outro!)” – Mike Chapman – (Beatport) – “Changing Cities and West Side Jack are wicked! Also nice to see Duriez back after such a long break!” – De:Bug Magazine Germany – “Considering for review.” – Tsugi Magazine France – “Cool ep. Like the David Duriez Going Rogue Dub.” – Soundwall.it – “Very good ep!” – DJ Mag Italia – “Up for review.”